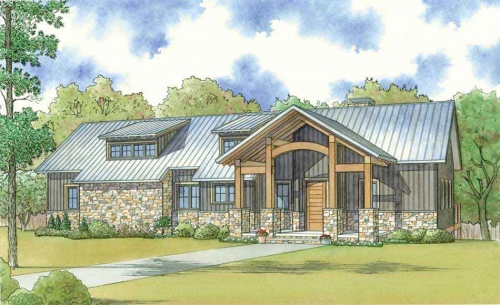 Contemporary or Modern style homes are always a popular choice, especially for busy families. Clean lines and modern amenities typify these two styles and make them a great choice for anyone looking to build or buy a new home. Most people think of these as one style of home, but did you know that there are distinct differences between the two?

Featured above is our Appalacian Trail (MEN 5083) plan.

Contemporary house plans are built on the foundation that is the modern style. Contemporary basically means whatever is popular at the time. Modern house plans are based on the Modernist Movement. It was a move from the traditional ways that tried to reinvent how we looked at the world.

In the 1890’s an “avant-garde" movement began. The new way of thinking was to push back against previous norms. This new era of everything for art and poetry to architecture and science was characterized by radical changes in how things were portrayed. The Modernist Movement was inspired by great thinkers like Sigmund Freud and Albert Einstein. Their theories on how the mind worked and reality were completely different than those of the previous generations.

This inspired people to look at the world differently. Gone were the traditional techniques. Bring in the Modern way of doing things. This was the teenaged rebellion of its time. People didn’t want the traditional brick and stone houses any longer. They wanted bright and airy homes that reflected how they viewed the world.

The political turmoil of the early 1900’s greatly encouraged this movement. The world was constantly changing. And it seemed to be getting smaller by the day. Wars were no longer being fought between just two countries. Multiple nations were getting involved in the conflict.

While war is always a terrible thing, it does bring two things with it: social and technological advancement. Prior to the World War I, the idea was that the way of life should evolve slowly. There was a belief that change was something that could only be brought about as a trickle rather than a stream.

Modernists challenged this idea. They believed that the previous ways of thinking had brought about the unnecessary conflict in Europe and that if there was to be a change, it needed to happen all at once.

Thanks to the war, the technological advances of the time were growing by leaps and bounds. Electricity was becoming widely available, telephone services were becoming something that everyone had and air travel was now a norm.

By the 1920’s, Modernism had taken root in every aspect of art, science and even politics. It had evolved with the times, however. Prior to this time, Modernism sought to overthrow every idea that had come before it. This movement wanted to leave those ideas behind and establish its own in their place.

The Modernists of the 1920’s took a step back and decided to build upon those previous ideals. This about face may have been brought about by the public’s reactions to the prior Modernists’ views. There had been a poor reception to the Modernists’ art and music.

Gone were the days of the horse and buggy and needing to have a space for them. Instead everyone was getting an automobile and therefor needed a place to store it and all of the things that it needed.

The modern design that came from the Modernist movement was typified by the lack of ornamentation. Prior designs had been chock full of ornamentation and frills. The Modern design was simplistic in comparison. The emphasis was on the materials used, rather than the craftsmanship. There were new ways of making windows and so more and more windows were added to homes and commercial buildings.

This was the world of the future and the modern designs reflected it. Rooms were airy and open with light pouring in from the outside. There was easy access to the outdoors for entertaining. And as people’s views on family changed, there was a move to a more isolated family grouping.

In reaction to this, more rooms were added to give children privacy and to give them a place to play and grow without being constantly underfoot. Gone was the central hearth. Now we had heat pouring in from radiators and central units. Home designers took advantage of this technological advancement to make the rooms larger and the floor plans flowed from one room to another.

World of the Future

Modern Design embraced the idea of the future. The designs included plastic and metal and glass in every aspect that they could be combined. Modern Design was often in grey and white and black. It would showcase exposed steel, plastic tubing and large open windows.

Modern Design was moving away from traditional brick and wood homes. Instead it moved towards the industrial and technological era. The homes would often be in odd geometric shapes and feature windows and doors where it didn’t seem possible to have them. It was full of clean lines and large open floor plans.

Large windows are put in to bring in an abundance of light and many contemporary homes will have green roofs or living roofs. These are roofs where plant life is encouraged and could even be gardened to become a sustainable food source.

One of the newest trends in Contemporary homes is to have entire rooms that can be opened up and used outdoors. While entertaining outdoors is something that is part and parcel of the Contemporary Design, formal dining rooms are starting to make a comeback.

An example of Modern Design.