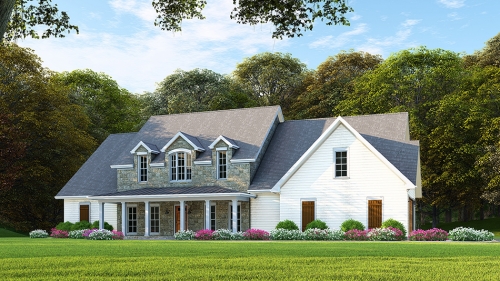 Your dream home is getting closer and closer. There’s already been so much done. No, really, there has. Yes, I know you’ve mainly done paperwork and dirt has been moved around. I promise this step will let you see something tangible. Not fancy, but tangible.

The foundation is probably the most important structure in your home (other than the love of your family). You want to make sure that you choose the right foundation for your type of home and the geological and weather conditions in your area.

A foundation is like a good pair of shoes. It needs to be fitted to your home in much the same way. There are 3 basic types of foundations. They all have their pros and cons. Also, they are used in different areas depending on the climate and geological features.

This is probably the most common foundations here in Northeastern Arkansas. A slab foundation is exactly that: a slab of concrete that has been poured large enough for a house to fit on. The main reason these types of foundations are so plentiful is that they are quicker and cheaper to build than other types of foundations.

This type of foundation is much more common in warmer areas. It is much less expensive to build this type of foundation because you don’t have to do any real digging. You basically have to create a negative space where you will be pouring the concrete and secure all the pipes and conduits that will be running through it.

That brings us to the downside of slab foundations. Slab foundations are more prone to moisture problems. The biggest hassle with that is freezing temperatures. We all know ice expands as it freezes. Well, ice trapped in a foundation will slowly expand any cracks it finds until they become a problem. Slab foundations also cause pest problems because your home is almost literally on the ground.

The other downside is that the plumbing and electrical conduits are run before the concrete is poured. This means that if you have any plumbing or electrical problems later, you will have to rip up the concrete in the slab to get to it.

Case in point, my aunt’s home is on a slab foundation. All her plumbing ran from the meter in her front yard where it connected to the city water main. There was one main pipe that ran inter her home under the living room and then split for the kitchen and bathrooms. Well we had a particularly bad ice storm a few years back and everyone lost power for at least a couple of days. She was lucky. Her power was only out for about a week. In that time, the large pipe under her living room froze and cracked.

The problem wasn’t evident until the next summer when water started seeping through the living room carpet. Three plumbers, one jackhammer and a couple thousand dollars later and the problem was fixed. It was not a fun process.

A crawl space foundation is where the house is slightly elevated from the ground. Usually crawl spaces give you between two and three feet of space between the ground and the floor at the home. Crawl Space foundations are installed by using footers and then some sort of support. Footers are concrete pads buried in the ground that gives a stable “footing" for the supports of the home.

Support pillars rest on top of the footers. These are made of a few materials. They can be brick, cinder blocks or concrete pillars. These supports are arranged 16 to 18 inches apart and under where the main support beams will run.

This old school method of home building gives you protection from pests such as termites. It also helps keep moisture from accumulating because it is an open space. It also gives easier access to the plumbing, in case, you have a problem.

They sure are reliable, though. Our home, which was built in the 1970’s and my grandparent’s home, which was built in the 1940’s, both have crawl space foundations. My grandparent’s home is still in almost perfect shape after a near miss with a tornado a couple of years ago. They have the added benefit of giving you a way to access things under the home. They also make a great cat house. Anyone want some kittens?

Full basement foundations give you a ton of extra space. Basements also give you room for safe rooms. The best location for a storm shelter is in a basement.

Full basement foundations have on major downside: Cost. They require excavation and concrete work. That makes it more expensive than any of the other types of foundations. Having extra space and a safe place during a bad storm might be worth it.

No matter which type of foundation you decide on, Nelson Design Group has you covered. We offer thousands of plans that can be customized to fit your needs.