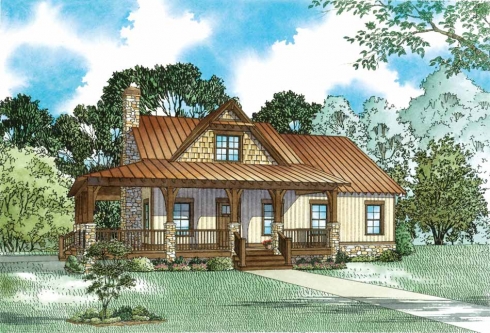 There is nothing quite like the view from the top of a mountain. The sky seems so close, like you could reach up and scoop the clouds up in your hands. The rivers seem so far below you, like they are a still life painting. The breeze is slightly cooler and the air is just a little cleaner. You can almost taste the sunshine because you are the first one it touches. It makes you feel alive. That’s where the inspirations for the Mountain Style homes come from.

I haven’t traveled much so I haven’t seen the Grand Canyon or the Rocky Mountains, but here in Arkansas we have the Ozarks. They are a smaller chain of mountains, almost like hills with too much ambition. The Ozarks weren’t formed the way the Grand Canyon or Rocky Mountains were. Instead of a glacier cutting its way down the landscape, they were formed by volcanic activity and plates moving under and above each other.

I’m not a geologist so I can’t say for certain, but I think this may be why they don’t achieve the height that some mountain ranges have. Though they may lack that height, they make up for it in pure beauty. One of the tallest peaks in Arkansas is Mt. Petit Jean. I have been there several times and each time it is simply breathtaking. My memories of those trips come back as I talk about these Mountain Style homes.

Featured Plan above is our Weekend Retreat II (NDG 1641).

History of the Mountain Style

The Mountain Style of building homes is one that is rooted in the very earliest days of American History. Before this land was tamed and brought to heel, there were those brave explorers who settled into the wilderness of our nation. Their homes are the basis of the Mountain Style.

When the first settlers arrived on the shores of America, they didn’t bring much with them. In some cases they were fleeing the problems in Europe and arrived here with not much more than hope. Many of them had hand tools and were knowledgeable in building homes. When they got here they found miles and miles of virgin timber forest.

All of that wood was quickly turned into functional homes. One room log cabins were common as people built shelter as quickly as they could. Other buildings that were erected quickly were barns and work areas for blacksmiths.

These log cabins helped them survive cold winters and harsh summers, but as civilization began to spread these cabins were abandoned in favor of newer homes made of milled timber. They were quickly torn down and replaced.

Log cabins may have been down, but they weren’t out. As the population kept rising in the Eastern part of the United States, people fled westward. Fresh air and open land appealed to them as much then as it does to us now.

As they made their way across the country, they couldn’t take much more than the original settlers. They had hand tools and their wits and so log cabins now became the norm once more. But civilization was slower to reach these outcroppings of the U.S. So the log cabins became larger and larger until they no longer resembled log cabins but were instead timber frame houses.

As the farms that they had founded became more and more prosperous, their homes became larger and larger. In the mid 1800’s, there were two major changes to the design of these wood based homes that caused a splinter in the styles that were being constructed. The first was that machinery made it easier to cut, plane and transport straight flat boards.

These milled boards were ideal for building a frame home quickly. Prior to the invention of the mechanical saw mill and the extension of the railway, these types of boards were incredibly expensive. They were hard to make by hand and were hard to transport. Therefor they were the domain of the wealthy alone.

Now, however, the common man had better access to this new medium and the farmhouse was born. Farmhouses were primarily built in areas where either large trees didn’t grow naturally or where all of the large trees had already been harvested.

The second thing that happened that split the style was the growth of a new richer middle class. These were the owners, managers and investors in the industries that were cropping up all over the Eastern United States in the wake of the Industrial Revolution. They made millions of dollars quickly. And they wanted to spend it.

So they started building vacation homes on the coasts and massive hunting and fishing camps in the mountains in Northern New York state. These homes, later referred to as Adirondack homes, were made of a mixture of large unmilled logs and planed timber. They were large and could only be jokingly called “fishing cabins".

This new style featuring large open areas with lots of windows and natural lights became very popular and were based on the Swiss chalets. In the 1850’s there was an architect who designed houses that were greatly inspired by the old world style of the Swiss Chalets and wanted to bring the ideas to the U.S.

The Swiss enjoyed their rustic refinement. Their homes were gorgeously made up on the inside with rich materials and wide open views of the Alps. This was translated to the Adirondack homes and given new life there.

These homes were built by the rich and so they could afford to have banks of windows giving them a view of the beautiful scenery in the North East. They were also structured so that the common rooms were larger and grander.

These Grand Camps became the envy of the rest of the U.S. and so became the start of the Modern Mountain Style of homes. If you look at any of the large, luxury Mountain homes, you will see the roots of the Adirondack Grand Camps.

The most popular design of Mountain Style homes is, and probably will always be, the log cabin or the mountain cabin. The idea of the getaway home has always been something that we have tried to make a reality and the modern cabin is one of those safe havens.

The design of the Mountain Style homes is reflected by the area and their purpose. The main components however stay the same. Most of the homes are relatively simple by design with natural elements and throwbacks to a simpler age.

The staple of the Mountain Style home is the log cabin. The early settlers to this land built them for shelter and now we build them because they are comfortable and easy to heat and cool.

A log cabin is one that is made of logs that have been cut to fit into one another. Despite being as c lose as possible, there are still going to be gaps between the logs. This will be filled in with chink. This process hasn’t changed much in the last 200 years, but the materials have been updated.

A modern log cabin will be made nearly exactly the same way. It will have logs cut to fit, albeit more precisely than in years past and chink in between the logs themselves. With the use of better tools and measurement equipment, logs are now more accurately cut and assembled. This gives less space to have chink.

The chinking itself has changed. In the past, people used a mixture of mud, clay and straw to make chink to push in between the logs. (Sometimes they even used animal dung.) This combination gave it a sticky consistency that solidified when it was dry. Today’s chinking is made of silicone and adhesives. So it’s a bit less stinky and it tends to fill the gaps more evenly.

Another advancement has been the use of veneers. Instead of using whole logs to build log cabins, cabins are now framed in regular lumber and then a log veneer has been fitted over the top to give it the appearance of a log cabin.

Other than cabins, the lodge is probably the most iconic look of a Mountain Style home. Lodges are the love child of the log cabins and the Adirondack Great Camp cabins. These homes are log cabins with an addiction to sunlight.

There are two major differences between log cabins and lodges: windows and space. A cabin tends to be a cozy home with lower ceilings and fewer windows. A lodge tends to have grand ceilings and windows that can look out for miles.

Lodges are designed to offer the best views. So while they still have the feel of the rustic Mountain Style with lots of wood accents and stone fireplaces, the windows tend to grab the most attention. Lodges get this idea from the Adirondack Great Camps where the wealthy gathered to enjoy their time away from the city. The Adirondack homes were typically built on a grander scale and would feature higher ceilings and large windows.

The modern cabin is more than just a log cbin. Many people now have a second home that is a small house tucked away close to a lake or a river and that is their cabin. They are not necessarily log cabins, but they do have many of the features of the Mountain Style. These include raw natural elements, simple designs and regional aspects.

A cabin here in the south is going to be different from one in the Pacific Northwest, but that doesn’t make it any less than a cabin. The primary thing to remember is that the Mountain Style cabin is going to include the natural elements.

So whatever kind of cabin you are looking for, you can find it here at Nelson Design Group. We have River cabins, Lakehouse cabins, log cabins, lodges, etc. You name it, we have it. Check out collection here: Riverbend Collection.

Maybe Mountain house plans are not your style? Don’t worry, we have you covered. Come check out Nelson Design Group’s collection of over 1,800 house plans. And come check out the past blog posts in this series:

Here at Nelson Design Group, we are always ready to make your dream home a reality. If we don’t have the plan that is right for you, we’ll make one. We are experts in our field and have been doing this for over 30 years. Give us a call today and we will be glad to help.

If you are looking at building a house, check out our Building Your Dream Home blog series. This series walks you through step by step on how to build a house and is updated regularly.

If you haven’t found a builder yet, we have a Find-a-Builder tool right here on our website. These are builders from around the country that we have vetted just for you! They are skilled in their professions and do a great job.

Nelson Design Group has over 1,800 house plans for you to choose from. If you’re unsure about finding what you need, give us a call at (870) 931-5777. Our representatives are always happy to help.

If you are a builder looking to buy plans, sign up for our Builder’s Program. We offer discounts you won’t be able to find anywhere else.

We also have resources that are just for you like access to our Master Planned Communities and Marketing Services.